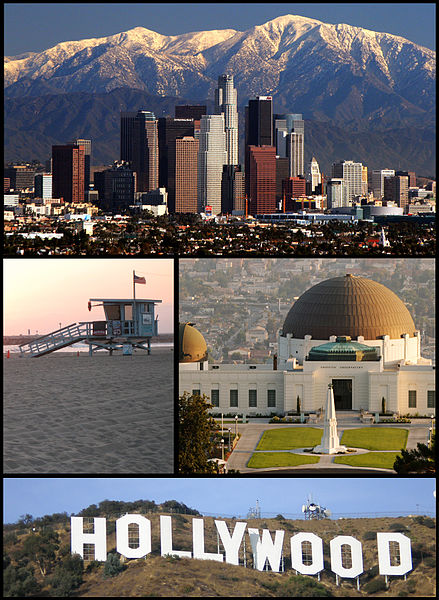 Los Angeles, CA, most commonly known as LA and nicknamed the "City of Angels" is the 2nd largest city in the United States with over 3.7 million people living within it's borders according to the 2010 U.S. Census.  The city of Los Angeles is comprised of over 80 districts and neighborhoods scattered across a land area of well over 450 square miles.

Los Angeles Fashion, Art and Entertainment -  Los Angeles is steeped in glamor due to it's rich Hollywood history and current thriving movie industry.  It is internationally recognized as the "enterntainment capital of the world" and continues to rank as the #2 U.S. fashion capital as well.  While known to be very glamorous on the entertainment spectrum, as a whole, LA's biggest appeal seems to be it's widely known laid back attitude in general.

Los Angeles Things to do attractions are aplenty!  Depending on your mood on any given day, with sunny year-round weather, top rated dining choices, weekly cultural festivals, museums offering rich history as well as modern themes,  nearby local beaches and mountains to hike or ski, it would be hard pressed for any visitor or resident not to find something they love to see and do in Los Angeles, CA.

Los Angeles Demographics consists of residents from more than 140 countries speaking over 200 different languages.*    It most certainly makes for an interesting mix socially. What's not to love about a city where everyone fits in?

Los Angeles Weather is considered mild by most states' standards as Los Angeles residents pleasure in it's Mediterranean-like climate all year round.  With mild to hot summers and somewhat cool winters with precipitation levels barely reaching 20 inches annually in the city's center.

Los Angeles Real Estate in 2022 runs the gamut of low income to some of the most expensive in the country.  No matter your budget, there is bound to be great Los Angeles Real Estate that is perfect for you.  To relocate to this great sunny city, do not hesitate to use our relocation services or call 310-508-4354.

SEARCH ALL LOS ANGELES HOMES FOR SALE ON MLS

This work is licensed under a Creative Commons Attribution-ShareAlike 3.0 Unported License.